Statistical data from Wigen.net's server
About wigen.net - Design - Free E-Mail - About this server

There are a few stat generators running on this host some are listed below:

- phpSysInfo - General information about this host

The web server is run by the open-source Apache HTTP server version 2.0. Apache has been the most popular web server on the Internet since April of 1996. The October 2003 Netcraft Web Server Survey found that more than 64% of the web sites on the Internet are using Apache, thus making it more widely used than all other web servers combined.

Some interesting facts from netcraft (Sep 2004). The current growth is 1 million sites a month! And the total number of sites is over 54 million! Currently the Apache server holds a market share of almost 68% and Microsoft's IIS holds 21%. Food for thought: I have heard arguments that microsoft's systems experience so many viruses and security holes because their software is so widely used. Well on the web server market microsoft only holds 21% but still manages to create havoc with worms spreading between IIS servers! How come?
Source Netcraft 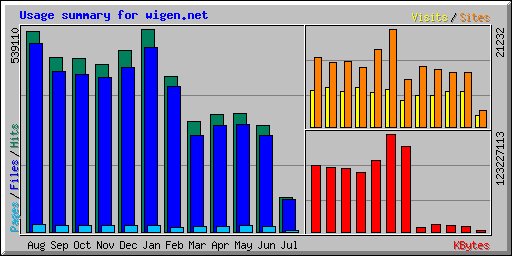 This server runs Qmail and serves the wigen.net mail domain. The server is located in Norway and has a backup mailserver in Australia. Spam is stopped with spamassassin and the realtime open relay database. Viruses are stopped with ClamAV.

The internet connection is a 10Mbit fiber delivered by lyse.no

The ups is being monitered by APCUPSD

Linux, cause the PC's a terrible thing to waste